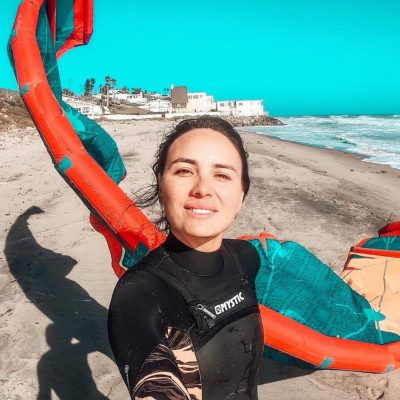 Bruna Kajiya is a Brazilian professional kiteboarder. She is a five-time Vice World Champion and a three-time World Champion Freestyle (2009, 2016, and 2017) in the World Kiteboarding League (WKL). Bruna Kajiya was the first woman to land a “Backside 315”, a trick that combines a 540-degree rotation and double handle-pass

Bruna is originally from Ilhabela where she competed as a swimmer from an early age, earning the nickname “Little Fish”. Following a surfing accident, she sought out a new sport and discovered wakestyle kiteboarding while studying in Maui.

Bruna is sponsored by Red Bull, North Kiteboarding, and Mystic.

Summer in Cyprus, Greece is full of events and parties but there is one event that stands out every year. It combines sun, fun, and music with adrenalin, excitement and extreme sports. It is the King of Kite – the Cyprus kitesurfing championships held at Kahuna Surfhouse.

Bruna Kajiya takes women's wakestyle riding to a new level. The top pros regard her style and power far ahead of her female competitors and after watching this clip, you will know why she can hang with the boys

On The Loose – Episode 8

In the eighth episode of "On the Loose," Ruben Lenten ventures over to Morocco for a photoshoot where he meets up with Bruna Kajiya.